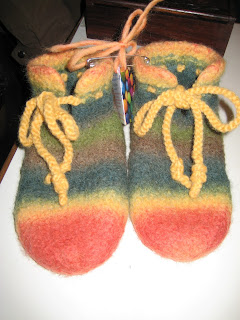 I love the projects that come to the store completed and consequently inspiring. This knitter felted these beautiful slippers from the Nova Yarn Value Collection - pure wool. A 100 gm ball that has 155 m and is only $6.99. I wove with it as a weft and it felted beautifully as well.

The Interweave Knits Accessories 2011 magazine is inspiring as usual and full of  'oh I want to try this and try that too..' - so often I will use my wonderful teenager students as guinea pigs - and work with them on trying new techniques or yarns. The girls wanted to make more mittens, but I thought it might be good to try a different pattern than using the regular Paton's and there is a great pattern in the above magazine called Arc Mittens described in the magazine as "...a curved line of increases becomes the focus of the Arc Mittens, while also creating the thumb gusset......" by designer Peggy O'Grady. The pattern calls for Brown Sheep Yarns Lamb's Pride Bulky which we don't have - but we do have Fleece Artist (YAY!) Big Blue ($15/100 gm.) which is comparable and lovely to work with - Blue Faced Leiscester after all! I have some difficulty making my students understand the making of the thumb gusset sometimes, so thought this might allievate the 'angst' of a gusset. And it is so cool watching the arc appear.....so I thought I better knit one before they begin....and it was a quick mitten to knit - of course I have to do another one.....yaargh.

The other tangent I went on was all due to a delightful customer as well.  She had a crochet hat on that was great and also made out of the Nova yarn as well if I remember correctly. The pattern was from ravelry.com and is free. The pattern is called Divine Hat and can be seen on http://www.rheatheylia.com/ too.
It eats﻿ a lot of yarn. I made it with the Nova yarn but obviously too big a hook - the US hooks are lettered, so I didn't know what size, so used what I had - a 5.5 mm hook, so that hat was huge, although it fit me (I have a big head). It asks for a worsted weight but the Nova is what I had. So now I am making it in Pur • 100% Merino Wool 164 yards per 100 gram hank 6-7 mm (approx. US 10-10.75) needles - not inexpensive this yarn, but really cool to use and lots of different colour combos. I think I might have enough...... 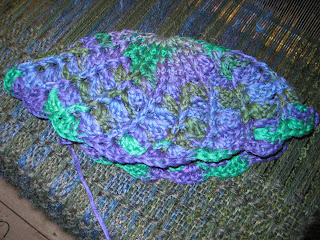 This hat kind of matches the weaving in the background. I like using the front post stitch and the swirl is very cool. I think I will use a different rib though, to save time and wool - on my crocheted toques I like the split single crochet and then the crab stitch on the edge. The yarn is partly felted so it is an interesting fibre to work with. Skacel has a free entralac scarf pattern online.

Now the last tangent that I was on was the crocodile crochet stitch - I have been meaning to explore that stitch a few times and then it finally happened. It is not hard, just a little brain scramble at first. However, I found a site with a video as well - the written instructions were straight forward and I applaud the author.
http://yarn-muse.blogspot.com/2011/01/crocodile-stitch.html 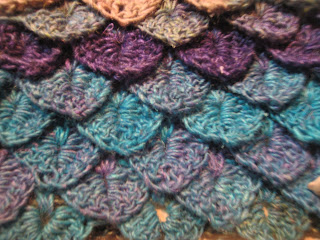 It is so very pretty - however, my idea was to make a collar affair, but I only got about 7 inches with 27 stitches and I was using Noro Silk Garden!!! so I would have had to use at least 3 balls, so now I am using  Milodon by Araucania, and only 15 stitches 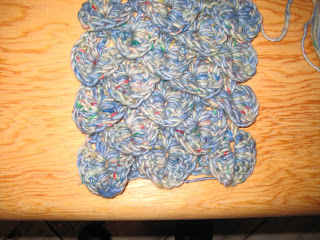 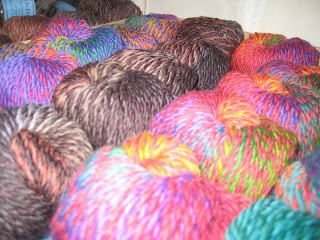 And one of the many new yarns - so pretty.....﻿
Mendocino by Crystal Palace - see patterns at straw.com
and one of my very favourite people in the whole wide world - my friend Betty with her first knitting project - a cowl made with hand dyed handspun yarn from Providence Farm wool. 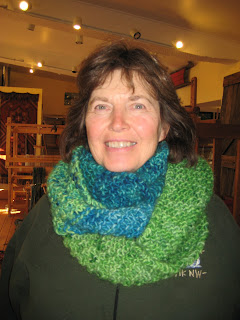 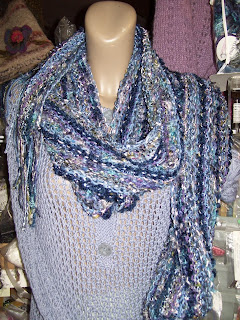 Welcome to our new blog. We hope to post news (such as our month long sale all of January and all of August!), pictures and patterns that come from the staff and our customers. The above shawl/scarf is a favourite of many of our customers and is Dora's signature shawl. She chooses about six different yarns, casts on about 100 + stitches on an 8mm, 80 cm circular(for storage, not in the round), and knit a different yarn each row leaving a tail to act as fringe. This is a great way to use up your stash and perhaps one 'fancy' yarn to bling it up. I have made scarves this way using anything and everything and just knit about 8-10 inches - a great evening project.