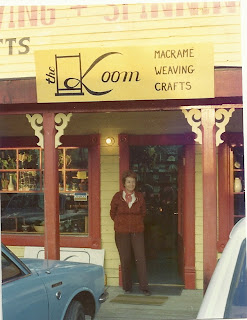 I first visited The Loom in 1974 when it was upstairs in the Wickertree and I was delighted to find a weaving store so close. Glen, my husband to be, took me there as a surprise and I became an "I Love the Loom" groupie. I learned later that Trudi started it by being encouraged by Dorothy Field (one of my mentors) who felt that there was a need for a supply store for weavers and fibre artists in this valley. Trudi was then a student of Henny Mook from Thetis Island and was a convert to the weaving world and thought it was a great idea. So 38 years later it is still going strong. Trudi continued expanding and changing the store to suit the needs of we that needed! Another friend of mine, Helen Washington also shared the store at one time with collectibles and she and I became friends later through the Shawnigan Library. I owe Trudi a lot for believing in me and 'carrying' me when I started teaching spinning and weaving. She brought in looms from New Zealand which I still use today for my weaving students and supplied me with fleece and spindles for teaching spinning. We became friends and shared many a dinner with her and her husband Lou (and Pickle the dog!). Trudi still weaves and she is in her 90s and getting younger everyday. 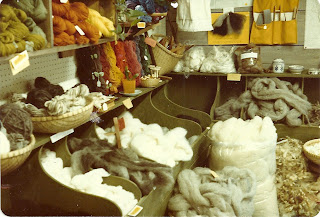 I believe that this is about 1977 and The Loom still uses some of the storage bins. And Condon's was the wool most of us were using. The variety of yarns today astounds me. 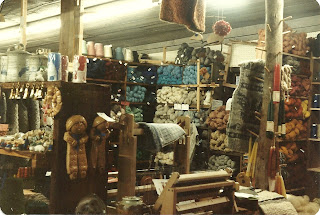 Pottery was also something you could also purchase and I still have some mugs I bought all those years ago. 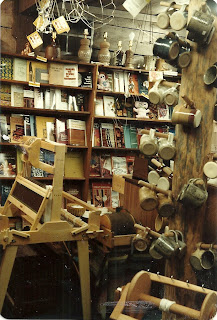 The mugs on the top left are the mugs I still have! 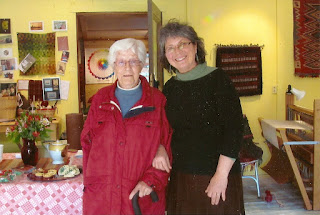 Trudy and I at Leola's Studio Open House, November 2011. She is just as lovely and lively. Thank you so very much Trudy for all your generosity and kindness.

And now 2012 begins and so does the January sale at The Loom. Happy New Year everyone!! See you at the sale.
Posted by Leola's Studio at 12:30 PM